Markets’ performance this week comes with a healthy dose of déjà vu. An impressive bull run dominated the narrative earlier in the week, bringing indexes close to all-time highs, but those gains have receded amid trade-related pessimism during this Friday’s trading. The Friday selloff has brought the S&P and Dow into the red for the week, with the NASDAQ holding on to solid weekly gains.

Volume is generally low at this time of year, with many traders on holiday, and analysts are eager to see what mood will dominate the market post-Labor Day.  Strong earnings drove the bull market earlier in the week, even as bubbling inflation continues to generate anxiety among more macro-oriented investors (core inflation indicators for the US came in at their highest levels in a decade, with rent increases driving the bulk of the price pressure).

Trade troubles emerged earlier in the week as the latest slate of tariffs in the United States and China’s ongoing trade conflict were announced. They became more pronounced Friday with the Trump Administration’s decision to impose steep metal tariffs on Turkey’s already struggling economy (the decision came amid a spat over the extradition of various Turkish and US nationals). The Turkish Lira is plummeting in response to the move, and investors seem to be selling off in anticipation of further disruption to international commerce (specifically, the risk of a banking crisis in Europe). European stocks have been harder hit, with Euro-area financial firms having far more extensive investments in Turkey, but US equities haven’t been immune from the selloff.

With strong earnings continuing to roll in, but constantly fighting through macroeconomic headwinds,  there’s no reason to think the volatile trading that’s dominated much of 2018 won’t continue for the foreseeable future. Fortunately, news-based trading approaches are actually associated with higher average returns when volatility goes up. That’s because more active trading generates a bigger gap between stocks being affected by news events and background price drift driven by the portfolio changes of more passive investors. 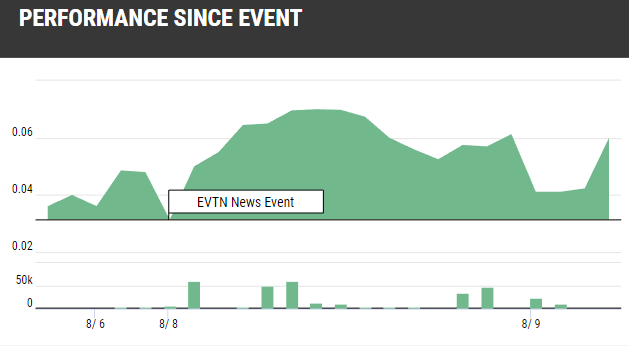 Enviro Technologies (AMEX: EVTN) centers on the marketing of their Voraxial technology for separating solids from liquids. In the past, the marketing of this product centered on the oil/gas sector. Before the market opened Wednesday, EVTN announced that it will be transitioning its sales and marketing activities to non-oil/gas related activities. The firm will pursue new business in the wastewater, sewage, and mining markets.

This transition came with a bit of “proof of concept:” the firm also announced that they have already begun work on a $2 million wastewater system for major utility firm.

Their stock has surged over 65% at the time of this writing, which represents a pullback from gains as high as 122% earlier in the week. The cause of the magnitude of this surge is not initially clear. Investors may simple see EVTN’s core tech as more viable in these alternative markets. Or they may be reacting to the tech’s potential marketability to a much more diversified client base. But that’s part of the beauty of a news-based trading approach: News Quantified users profit either way.

If you’d like to learn more about using the news to find market-beating profits, we highly recommend one of our complimentary virtual training sessions. We’ll take a look at how deep historical data can help us not only spot profitable news events, but buy them with a hold-time designed to maximize profits. You can claim a spot in our next session using the button below: