Markets are posting a strong performance this Friday to close out a red-hot week, with both the Dow and S&P 500 bumping up against their all-time records. The latest salvo of tariffs between China and the United States, announced earlier this week, proved less stringent than many investors feared, giving a large spark to get the broad-based rally started. Markets retreated slightly on news that a trade deal may be close with Mexico, but not Canada, but remain in solidly positive territory.

Speaking of sparks, Cannabis stocks continue to be red hot, with Bloomberg calling them “the new Crypto:” news mentions and trading volume are spiking in concert. Peter Atwater, as quoted by Bloomberg, suggests that, as with last year’s huge volume of interest in cryptocurrency stocks, the surge of interest “is among the novice wanting to know how to buy marijuana stocks.”

As with crypto last year, we’d expect that sort of high-risk, high-reward market to exhibit high volume and roller-coaster like price movement. On Wednesday, for instance, trendy Cannabis stock Tilray Inc. (NASDAQ:TLRY) doubled before dipping into the red, and then somehow ended the day back up 40%.

Whether or not you’re a “believer” in the underlying industry, this huge volume can drive substantial profit opportunities for news-based investors (who can profit from dramatic price swings while limiting exposure to the sector’s substantial buy-and-hold risk).

We recently wrote about the coming reorganization of the stock markets’ sectors. That change is finally almost upon us. On Monday, firms including big names like Alphabet, Netflix, Facebook, Twitter and Disney will officially be reassigned to the new “Communication Services” sector. The changes will lead to a market cap drop for Technology and Consumer Discretionary (which previously contained many of the stocks being moved) and big growth for the high-profile new sector (formerly Telecommunication Services).

Recent months have featured a notable divergence between the booming US economy and global markets facing a good deal more trouble spots. But analysts are starting to see the momentum of the dollar peak. China, meanwhile, appears committed to not devaluing its currency as part of the current trade conflict. In Turkey, a potential currency crisis appears to be abating: steep rate hikes have successfully stemmed capital flight and a back stabilization plan is said to be on the way. With these factors in mind, many analysts are expecting an emerging market rally in the coming months. Whether that rally comes at the expense of US equities remains to be seen. 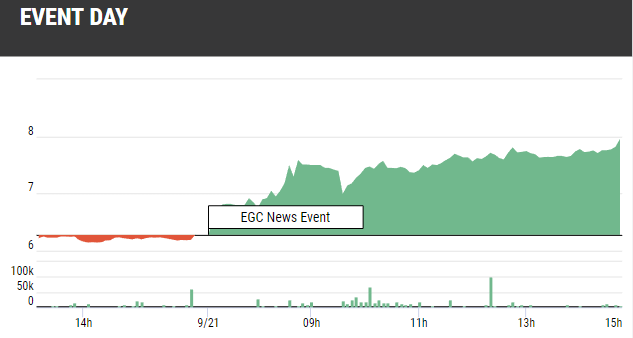 This morning, EGC issued an update concerning their merger with affiliates of Cox Oil, LLC. The deal, formally announced earlier this month, was detailed in today’s announcement, which suggested it can no longer be canceled by Cox due “further material disclosures.” Final details are still being negotiated. The deal is expected to be closed by October 10 of this year.

Cox will acquire EGC for $9.10 per diluted share, for a total price of approximately $322 million.

EGC is an energy exploration and production company focused on the Gulf Coast region. They are headquartered in Houston, Texas.

The stock has surged on the announcement and is still moving up ad the time of this writing. Gains are currently sitting around 27%.

The stock sat near the $9 mark much of the past year after the contours of a potential merger agreement emerged in June. The price fell off in recent weeks, however, presumably as investors began to fear the deal could fall through. But today’s announcement appears to have restored confidence.

If you’d like to learn more about news-based trading, you can start here. But we highly recommend one of our free live virtual training sessions. We don’t put on a hard sell; we just take a practical look at the fundamental insights behind news-based trading (an approach hedge funds have been leveraging for years). And then conduct a hands-on demonstration of how this quant-driven approach is finally accessible to smaller investors using the News Quantified platform.

You can claim a space in our next available session using the button below.