At this point, we’re coming to expect the unexpected in this chaotic market environment. Yesterday, stocks posted a huge rally after opening down on trade fears. Today, the bulls came charging out of the gate, appearing to build on yesterday’s momentum. Yet the rally appeared to be losing steam at the time of this writing.

The volatile trading environment is nothing but “target rich” for news-based traders, who use news-based quantitative analysis to make money on swings in valuation, not predicting the direction of the entire market. You can learn how News Quantified users find stocks with profitable momentum (that easily beats broader market performance) in one of our free weekly training sessions: 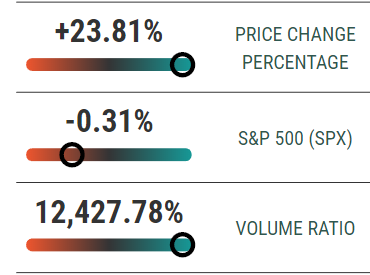 PowerVerde specializes in developing power technologies focused on waste-energy applications, which require special engineering to maximize efficiency by recovering as much energy as possible from the waste-conversion process.

Researchers believe a single 60 kW unit from PowerVerde could power the waste treatment needs of 6,000 person village. Energy efficiency is essential in this context: areas without access to developed sewer infrastructure are also likely to lack high-capacity electrical infrastructure.

The value of events like this transcend the first order revenue associated with the sale: we have a powerful signal of the viability of the underlying tech, as evaluated by a major university’s research program. Indeed, investors have been piling into PowerVerde since the announcement: it’s sitting up around 25% at the time of this writing after ascended over 40% in earlier trading.

Keep checking the News Quantified blog for a small but powerful sample of the 1000’s of profitable plays available to our users each and every week.