Yesterday, it appeared that nothing could dampen the mood of the bulls. We wrote, however, that “the only thing that appears certain is more volatility.” Indeed, much of the past week’s narrative is being upended during today’s trading session. This was partially sparked by news that talks between Chinese trade representatives and the Trump Administration had resumed. It doesn’t appear that progress was made, however, as news broke today that the US President currently supports going ahead with $200 billion in additional tariffs on China as soon as next week.

That news helped break the markets gain streak: major indexes are broadly down during today’s trading, with the Dow leading the way. As usual when trade tensions flare up, industrials and other stocks with international markets—like Boeing and Caterpillar—have been particularly hard hit by the report. Trade sparring with China wasn’t the only disruption on the international front.

The Argentinian government has also requested the aid of the IMF, needing immediate relief from a $50 billion loan as they seek to prevent a default. Argentina’s public debt is largely denominated in foreign currency, so they can’t simply devalue the Peso. The Argentinian Peso, meanwhile, continues to plummet. Desperate to defend it, the Argentinian Central Bank has increased rates to the near-punitive 60% – and pledged to keep them there until December. Whether or not they succeed in propping up the currency, rates like this are almost sure to put a huge cramp on growth, dramatically increasing the price of credit. While the IMF appears ready to negotiate, it’s unclear if the relief they could offer would ultimately prevent the Peso from defaulting.

Fresh off the heels of a currency crisis in Turkey (which may not be over), we may continue to see a wave of international debt crises.  As the US Federal Reserves continues to raise rates in the face of a booming domestic economy, other countries face pressure to raise rates to prevent capital flight. The combination of international tension and surging US earnings appear likely to make for a volatile fall.

News-based trading can thrive in this context on multiple fronts. First, we have access to a huge variety of news events that create short opportunities. But, even for investors who prefer to remain long, opportunities abound. It’s important to understand that, even when the market is falling steeply, the momentum from specific positive news events easily outweigh broader downward momentum. Today’s Top Performer is a great example. 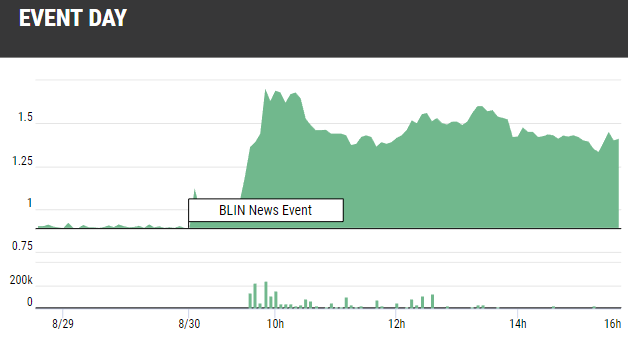 Investors have been piling into the stock on the news. It’s currently sitting up over 58% after nearly touching 100% gains earlier in the session. News events like this drive value not only through first-order sales (though that doesn’t hurt) but by confirming the market viability of a firm’s offering in a highly competitive market like enterprise analytics software.

If you’d like to learn more about using the news to find market-beating profits, we recommend one of our complimentary virtual training seminars. There’s no hard sell or obligation. We just take a practical look at how our how platform lets smaller investors get in on the quant-driven profits hedge funds have been harvesting for decades. You can sign up for a spot in our next session using the button below: