Markets continue to be predictable only in their unpredictability. Yesterday, markets looked like they would post a solid rebound from Friday’s tech-focused sell-off. Then, late in the day, major indexes turned sharply negative as tech shares again took it on the chin. Markets are gyrating wildly today, fighting to stay positive against several steep selloffs. Tech continues to suffer, with Amazon under pressure today after an apparent taxation threat from the US President.

Acute trade war fears are lessening, but bulls don’t appear ready to seize the market as they did much of the past year. Profits for quantitative stock-trading strategies, especially those founded on news analysis, actually increase in volatile market environs such as these. The more market “churn” separates news events from broad market momentum, the more traders using the sea of data generated by financial newsgroups will profit. You can learn why (and how to use our platform to maximize your own investing strategies) in of our 100% free weekly training seminars. You can sign up using the button below: 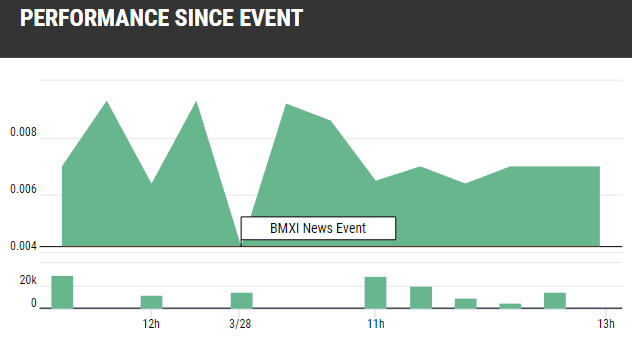 Brookmount, a gold-mining company incorporated in Nevada, reported excellent results from the last sixth months of its Indonesian gold-mining operations. BMXI’s properties in the country produced 1,600 oz. of gold, roughly $2 million, during the period—good for an $800,000 operating profit. Improvements in the companies “heap leaching” process for extracting gold are believed to be contributing to improved yields.

Brookmount is searching for opportunities to further expand its presence in Indonesia, one of the world’s fastest-growing economies and a rich source of mineral resources. BMXI acquired its Indonesian holdings from SL group earlier this year, another event recorded by News Quantified. Investors didn’t buy into the acquisition then, selling off the stock over the past several months. But improved production numbers suggest BMXI was right to believe it could drive greater operational efficiencies from these mining properties, and investors are changing their tune.

The stock is up sharply, over 65% at the time of writing, after doubling earlier in today’s trading. Small mining stocks can exhibit incredibly volatile valuations: the outcomes from a single mine or oil/gas play can dictate the financial viability of entire firms. This dynamic makes them a particularly rich target for news-based traders, poised to strike before even mining-focused investors who rebalance weekly.

From micro-cap miners to mega-mergers, the News Quantified blog is a great place for investors to get a sense of the diversity and potential of the 1000’s of profitable plays available to our users every single week.