Major indexes are up this Friday, a performance representative of an excellent week for stocks. This week’s run constitutes a show of resiliency in the face of trade fears, recovering much of the ground lost during June’s trade-induced selloff. That said, the actual economic effects of a brewing trade war haven’t even been felt yet: the action so far is simply investors trying to anticipate and price the pain. Whether markets can ultimately weather the storm or not, the coming months appear almost certain to continue exhibiting volatility from uncertainty in international commerce.

Investors are confronting a fascinating question—and the right answer will be highly profitable. Where will trade conflict cause investors to put their money? Here’s one fascinating option to consider: economic difficulties often cause a flight to the U.S. dollar and its related assets (like Treasures), broadly considered one of the safest assets in the world.

This dynamic would only be reinforced in the current economic environment, with the U.S. economy raising rates (making it more profitable for foreign investors) as it continues to command a red-hot economy. An influx of international capital would create upward pressure on the dollar, increasing the price of U.S. exports and buffering the very trade gap that tariffs were seeking to attack in the first place. Rising U.S. rates appear to be attracting foreign capital at the expense of other traditional macroeconomic safe havens,  with gold, the Japanese Yen, and the Swiss Franc all down in recent months.

What would these dynamics look like for particular sectors and stocks? No one is certain, which is why the market continues to ebb and flow in reaction to trade news. We may already be seeing some of this action play out, with high-profit sectors like tech continuing to leave export-oriented industrial stocks in the dust. Boeing (NYSE:BA) and Caterpillar (NYSE:CAT), for instance, continue to suffer when investors feel pessimistic about trade.

Elsewhere among high-profile stocks, Tesla (NASDAQ:TSLA) suffered a tough week. Production troubles with their vaunted Model-3 caused Tesla’s stock to plummet this spring, but it had since posted an excellent rebound. It entered another sustained selloff this week, however, as an increasing number of financial analysts placed the stock in their sell category. Financial commentators are increasingly concerned that Tesla cash-burn rate is unsustainable; further loans will eventually become difficult to obtain if production numbers continue to remain far below expectations. For now, Tesla remains a powerful symbol of markets’ current volatility: 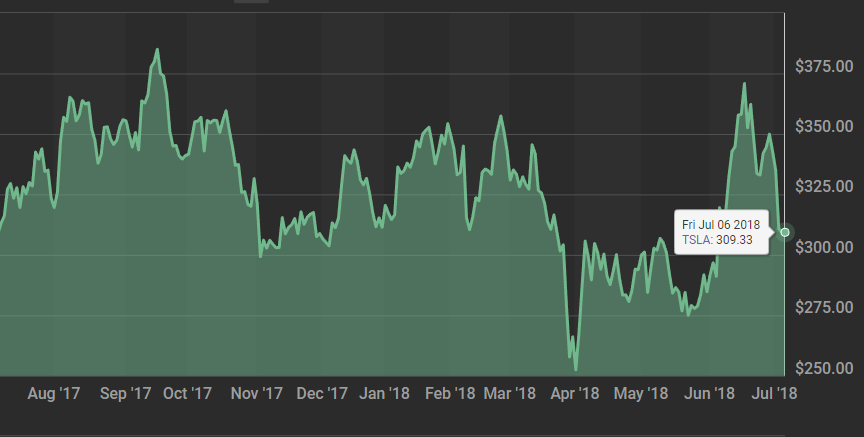 Aegean Martine Petroleum is an international fuel logistics firm, supplying marine fuel to both ships at sea and in port. They procure fuel from refiners and distribute it to a global network of shipping clients ranging from cruise lines to cargo haulers. Yesterday, they announced a new financing agreement with Mercuria Energy Group, a large integrated energy trading firm.

Under the terms of the agreement, Mercuria will help support ANW with global credit lines as the firms explore a broader strategic alliance. ANW has an incredibly capital intensive business: ships are an asset that pays off over an incredibly long period, while fuel has a large intermediate cost while in transport. A large, efficient credit line is thus essential.

The total “trade finance facility” from Mercuria amounts to $1 billion. A smaller $30 million operational credit line is included. Mercuria will ultimately receive a 30% stake in ANW in return.

Investors have been pouring into the stock since the announcement Thursday. The stock currently sits up 200%+ since our news alert, actually a substantial pullback from a 300% run-up.

If you’d like to learn more about how News Quantified is using real-time stock news analytics to help smaller investors compete with hedge firms for data-driven profits, we encourage you to attend one of our totally free training sessions. There’s no obligation or hard sell: we just take a look at how simple and profitable data-driven trading can be—with the right platform. Claim a spot in our next session using the button below.