Markets put on a show for the bulls this week, with the announcement that the Federal Reserve would modestly accelerate its pace of rate hikes doing little to damage investor sentiment. A flurry of acquisition activity appeared to bolster investors’ confidence in the overall financial environment. A US court’s antitrust ruling in favor of ATT’s (NYSE:T) purchase of the media giant Time Warner provided a spark for the wave of interest in major corporate M&A activity.

The rally is finally succumbing to macroeconomic headwinds during today’s session, as trade fears re-emerge. Weeks ago (and with the US eager to solicit Chinese cooperation for its North Korean summit in Singapore) the two superpowers appeared to reach a tentative (though vague) trade agreement. China announced that any compromise was off the table this morning, however, after the Trump Administration announced as yet unspecified tariffs on $50 billion of Chinese goods. China’s response is expected to target industries concentrated in states that support the Trump Administration.

Major stocks that have become proxies for trade fears, like Boeing (NYSE:BA) and Caterpillar (NYSE:CAT), are down on the news. Their largely international supply chains (and markets) are seen as particularly vulnerable to potential trade retaliation.

It’s been a particularly profitable week for News Quantified users. We highlight a few of the most profitable plays on News Alerts issued by out platform below. Real-time news data synthesized with a deep database of market reactions to previous new events continues to be a consistently profitable strategy. To learn more, we recommend one of our totally free training sessions; just sign up using the button below: 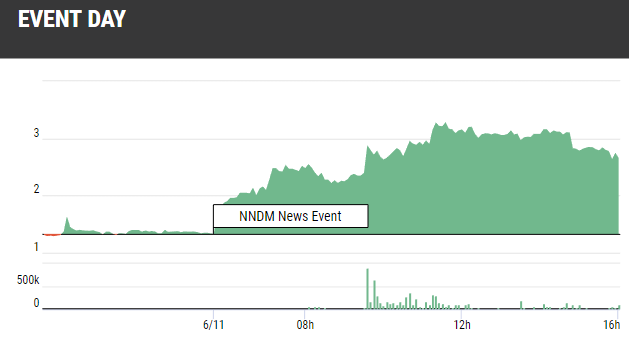 This 3D-printing stock posted dramatic gains after releasing two data points indicating a growing market presence in the defense industry. In the same announcement, they revealed that they have been approved as a U.S. Department of Defense Vendor, and that a “Top 10” defense contractor had just purchased a second printer from the firm.

3D-printing has a multitude of potential applications in the defense sector, which places a premium on decentralized, adaptable logistics. Their stock jumped as much as 117% in the aftermath of the announcement and currently sits up 77%. 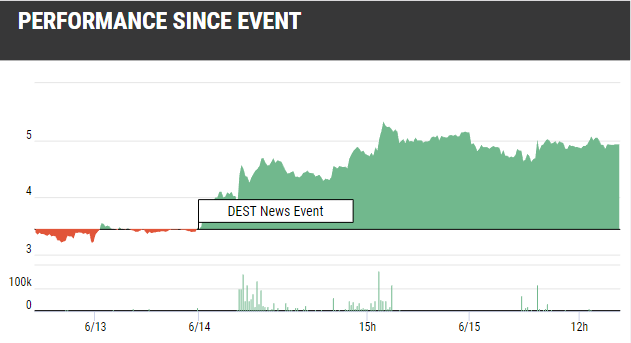 This maternity retailer posted nice gains this week after quarterly results showed a nice recovery for the retailer after some recent struggles. Retailers recovering after improved efforts in the digital marketplace continues to be a theme of our Top Performers in recent weeks.

Indeed, DEST posted 24% YOY revenue growth, built on a 43% surge in e-commerce sales. Successful cost-cutting, with general administrative expenses down 6.8%, further bolstered the bottom line. Investors poured into the stock on the news, driving it up nearly 60% before consolidating at its current price point, up 42.9%. 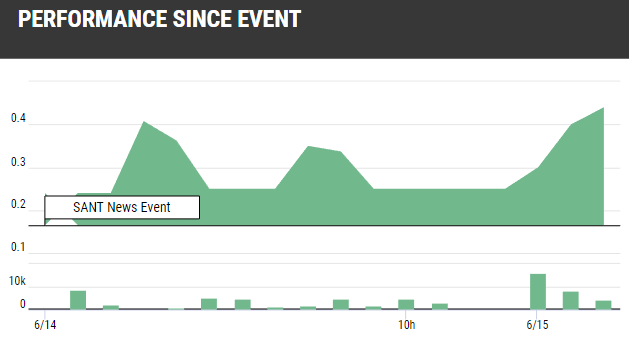 Santeon is a cloud-based service provider specializing in using “managed processes” to solve complex business problems. Their stock is surging today after announcing plans to acquire Corum LLC, the developer of a cryptocurrency and ICO trading platform.

Bitcoin has been in the headlines this week after a new investigation suggested that much of its runup in value last year was the result of an elaborate fraud. Whatever the fate of the “global currency” vision for blockchain, investors clearly remain interested in enterprise applications for blockchain technology. Santeon group is up over 60% since the announcement. Whether you’re a skeptic or believer regarding blockchain, the high-risk sector exhibits plenty of dramatic price movement—a perfect target for news-based traders.